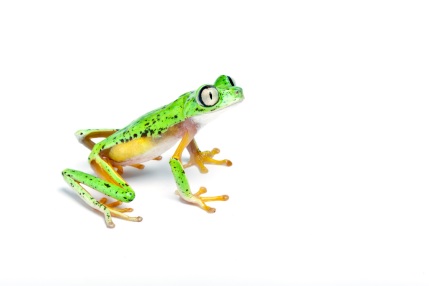 The Lemur Leaf Frog, Agalychnis Lemur, is a Critically Endangered phyllomedusine frog from Central America. During a re-assessment of Leaf Frog classification, based on DNA profiling, the species has now been moved from the previous genus Hylomantis to that of Agalychnis (Faivovich, et al, 2010). Recently, research has highlighted the significant difference between Costa Rican and Panamanian populations, the extent of which is similar to that found between other completely different species of Agalychnis (Gray, 2012).

Agalychnis lemur populations have declined severely in recent years, due at least in part to the chytrid fungus Batrachochytrium dendrobatidis (Smith, et al. 2009). First described by Boulenger (1882) from Costa Rica, this frog has greatly reduced in numbers here to the point where it is now only known from 1 or 2 localities in the country. This has clearly indicated the necessity to manage populations of these Critically Endangered frogs separately for conservation purposes. This collaborative project aims to help secure the species’ future through a combination of specific research, education, and focused support for both in-situ and ex-situ conservation.

Gray, A. R (2011). Notes on Hybridization in Leaf frogs of the genus Agalychnis   (Anura, Hylidae, Phyllomedusinae), Cornell University and the National Science Institutes’ ArXiv:1102.4039v1, can be viewed as a high quality printable PDF or online at: http://arxiv.org/pdf/1102.4039v1

Boulenger, G. A. (1882). Catalogue of the Batrachia Salientia s. Ecuadata in the collection of the British Museum, 2nd Ed, London. Taylor and Francis publishers.